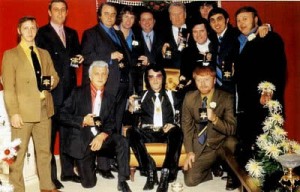 Elvis Presley as the Godfather of his own "Memphis Mafia".

An Honorary Member Of The Memphis Mafia Shared This Story About Elvis Having Fun, As Told By Billy Smith.

Back in the early sixties when Elvis was living in Los Angeles most of the time, he invented a lot of games to amuse himself and all of us. It wasn’t as easy to do these things in Los Angeles as it was back in Memphis because of the room and noise most of the games presented. But you know Elvis, he always gave it his best shot.

One day Elvis got everybody together early. Jo and I lived at the house on Perugia Way with Elvis so we were always in on most of the games. We consider that lucky—lucky to be in on them and lucky to get through some of them safely. But we always had the best time and things were never dull, to say the least. All the games were great fun, but one particular one stands out in my mind still.

It all started out one afternoon when we were all in the den watch­ing a war movie on TV. We were commenting on what great shots we were. Elvis was sitting there just smiling.

“You guys couldn’t hit a cow in the ass with a bass fiddle.”

‘And I guess you happen to be a crack shot,” we all kidded Elvis. “I learned how to shoot in the army, while you guys were going to sock hops.”

We kidded for awhile back and forth. All of a sudden Elvis got that little glimmer in his eyes. We knew he was up to something!

“You know those guys at the studio do a great job making that look like a real ocean with ships. All they are is toy ships,” he told us. Then with a very mischievous grin he said, “Let’s set up our own ocean.”

We all just sat there looking at him! We couldn’t imagine what he was up to this time. I guess we should have gotten used to surprises and strange events but he never ceased to amaze us all.

“You guys, use your imagination! We can build an ocean in that little bitty pool right out in the backyard.”

He sent Richard Davis and me to the local toy store to buy all the toy boats they had and about 12 BB guns. You should have seen the look on the salesman’s face. We bought all they had in stock and headed back to the house on Perugia Way.

We put all the little boats in the pool and loaded up the guns. We fired away, each one of us claiming to be the best shot in the group. Of course you know Elvis had plenty to say about that. We had a lot of fun for about an hour and then it began to get boring.

“You know what’s wrong?” Elvis asked. “It’s too easy. We need mov­ing targets! So, go get some of those little wind up boats or some with batteries. “Get all they got this time,” Elvis told us.

Well we got all they had the last time but not moving ones. Off we went back to the toy store. Elvis also told us to get some more BB guns so he wouldn’t have to stop and reload. You should have seen the way the salesman looked at me this time. “What are you going to do with all these boats?” he asked.

“Oh we’re going to sink them with these BB guns,” 1 told him.

“Really,” he said and looked at us like we didn’t have good sense. The little boats were very expensive and we bought all there were in the store. We took them home, again we

Put them all in the pool.  The battle began, the little ships and boats were going all over the pool. Everyone was armed and we ail took our places around the pool. We had a time limit in which to sink as many ships as we could. If anyone would have looked over in the backyard, I feel sure they would have called the looney-wagon to us.

We all always had so much fun, especially Elvis and this was a way to release tension without having to be upset. We were like a bunch of kids having a game of war. As the ships sank, Priscilla, Jo, Patsy, Joanie and the other girls would repair them with tape and set them back to sea for more battle. We played this game for hours. We even had snacks brought down to the pool so that we wouldn’t have to stop.

Someone was going to take a pic­ture of the whole thing but the flash wouldn’t go off. I don’t know who threw the flash in the pool but Elvis took a shot at it and when the BB hit it it flashed.

“Ah Ha!!” Elvis yelled. “Go get all the flashbulbs the camera shop has.

“This had turned into one of Elvis’ famous buying sprees. We left the others at the pool with Elvis still sinking ships and headed for the camera shop. Richard told the salesman that we wanted all the flashbulbs he had on hand.

“What kind of film do you need?” the man asked. We don’t use film with them Richard told the man. “I see,” was his reply. He watched us all the way out.

We returned to the house with the flashbulbs. Now it was getting sort of late. We dumped all the bulbs in the pool and took our place with everyone else—man, it looked like the Fourth of July!! The whole back yard was lit up like a Christmas tree.

We didn’t stop to think of the con­sequences. The bulbs were glass and as we popped them the glass went all over the pool. We were having too much fun!!

The next morning in the light we knew what had to be done. Oh what a mess!!! The pool had to be drained and cleaned, which took several days. The yard was a mess. The Gardner nearly fainted when he came. He didn’t speak English, but we got his message. Some of the guys helped clean the yard and a few of us took the pool.

Of course Elvis had a change of heart and lost interest in the  whole game until everything was back in order that is.  I almost said back to normal but I knew better.  Things with Elvis were never ordinary or just plain normal.  We were never bored, that’s for sure.

Elvis never forgot  about the game we played that night.  He talked about it for years. The night we had,” All Guns Poolside!”

6 Responses to Elvis Having Fun!