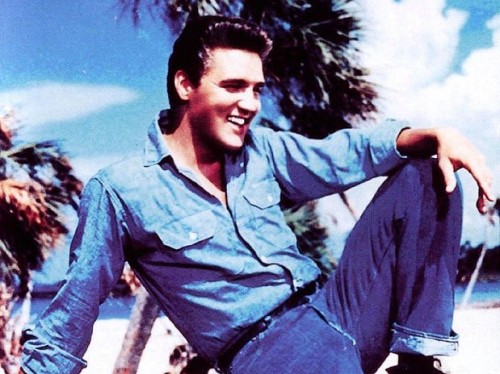 A vagabond family composed of Pop Kwimper (Arthur O’Connell), his son Toby (Elvis Presley), and various “adopted” children, including nineteen-year-old Holly Jones (Anne Helm), is traveling in Florida when Pop drives onto an as-yet-unopened section of highway. When the car runs out of gas, Holly persuades Pop to take up residence on the land next to the road. A chance encounter with an avid fisherman (Herbert Rudley) gives Holly an idea. They build a thriving business catering to sports fishermen. 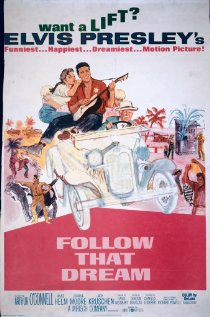 Trouble soon follows. Toby rejects the advances of amorous social worker Alisha Claypoole (Joanna Moore), who goes to court to have the children taken away in revenge. Also, her government official boyfriend considers the squatters’ home to be an eyesore and wants to evict them. Finally, since the area is outside the jurisdiction of any law enforcement, two gamblers (Jack Krushen and Simon Oakland) soon set up a casino in a trailer.

In the end, Toby’s earthy wits win over the judge and the family returns to its new land and home. Holly also gets Toby to recognize that she is a grown woman.

The title Follow That Dream was chosen, allegedly, because the songwriters could not find a rhyme for “pioneer“. At first, Powell was unhappy that Presley had been chosen for the role, but after seeing the finished film he thought Presley had done a great job.

It was filmed in Citrus and Levy Counties, Florida, specifically Inverness, Inglis and Yankeetown. The courtroom scene took place in the 1912 Citrus County Old Courthouse in Inverness which has been restored and is listed in the National Register of Historic Places. Part of the courtroom restoration can be directly attributed to the film in that it was the only record of the original courtroom configuration. Yankeetown memorializes his stay in the form of their major highway, Follow That Dream Parkway. This parkway was named due to the efforts of four Elvis fans. After months of meetings, the parkway had a grand opening under its new name, Follow That Dream Parkway on July 27, 1996. The dedication and celebration was held in Inglis Florida.

A sample of the movie:

http://www.youtube.com/watch?v=jm6wsnTtROQ
A pre-credits scene was filmed, which explains why Tobey (Elvis) used the ten-times tables, when he’s with girls.

Singer/songwriter Tom Petty claims that he first became obsessed with rock and roll after meeting Elvis Presley and watching him act and sing during the making of Follow That Dream. Petty’s uncle was a crew member working on the film.

There are  five (full) songs in Follow That Dream and most seem to occur in the first half of the film: