The USS Arizona Memorial straddles the sunken battleship and is dedicated to remembering all those who lost their lives in the attack on Pearl Harbor on December 7, 1941.

More than 4,000 fans attended the concert on March 25, 1961, purchasing tickets ranging in price from $3 to $100. The concert, which featured Elvis Presley and an all-star lineup of entertainers, raised just over $54,000 toward the $500,000 goal. Many public and private donations followed the show, and the USS Arizona Memorial was dedicated on May 30, Memorial Day, 1962.
Back in 1960, initial fundraising efforts to build the Memorial had stalled, with only half of the funds needed raised. In an effort to re-energize the campaign, Hawaii journalists sent out an appeal to newspaper editors across the country asking for editorial support. Elvis Presley and his manager, Colonel Tom Parker, read about the effort to raise funds and decided to do a benefit concert in Hawaii to help.
In honor of the 50th anniversary of Elvis’ benefit concert for the USS Arizona Memorial, EPE have posted photos and videos.
Click here for photos from Elvis’ arrival, the press conference and the concert and watch a video that includes footage from Elvis’ arrival in Honolulu for the concert plus his 1968 return visit.
(News, Source;EPE) 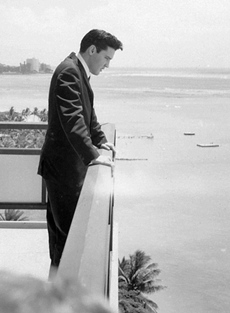