Ive been asked lately if I would post more information about Rising Sun.

Elvis bought Rising Sun from a man by the name of Robert Boyd.
Elvis renamed the Horse “Rising Sun” and it became his personal mount.
The barn soon bore the name “House of the Rising Sun”.

To my understanding Rising Sun was the 2nd horse to be purchased by Elvis, Domino was the first.
Rising Sun was Elvis’ favorite Golden Palomino, and when he came to live at Graceland in the mid-1960s, the stable was named “House of Rising Sun.” Rising Sun enjoyed a full life of roaming Graceland’s pastures for 21 years, until his death in 1986. He was buried facing the rising sun in the east. After the loss of Rising Sun, another Palomino Quarter Horse, Sun’s Reflection, was brought to Graceland in 1988. Both Sun’s Reflection and Rising Sun came from the same bloodlines and were purchased from the same farm. Sun’s Reflection lived for 27 years, but died at Graceland on August 14, 2009, just two days before the anniversary of Elvis’ death, August 16. Sun’s Reflection died of respiratory distress, despite the valiant efforts of a team of veterinarians from Mississippi State University College of Veterinary Medicine to save him. Both Rising Sun and Sun’s Reflection represented Elvis’ love for the Palomino Quarter Horse. 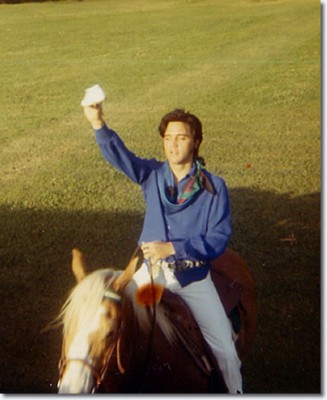 Today there are still horses at Graceland, and the mansion has been open to the public since 1982.
Rising Sun was born in 1961. 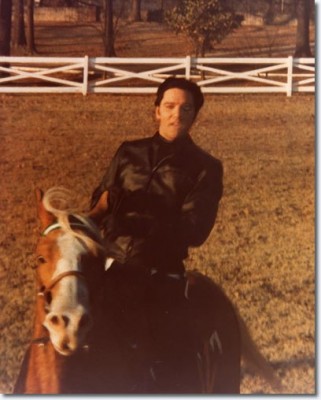 Ebony’s Double, a Tennessee Walking Horse and the last of Elvis Presley’s surviving horses, died suddenly on , January 14, 2005. He was 32 years old. 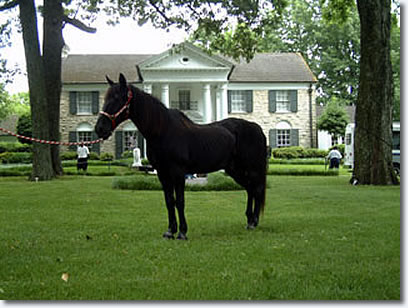