Research into Elvis Presley’s first California concerts over the first week of April, 1956, has yielded new material about the San Diego dates, including unpublished photos of the rock icon backstage at the long-gone San Diego Arena at Eighth and Harbor.

Elvis’s first California performance was a taping for the Milton Berle Show on April 3, 1956, on the aircraft carrier USS Hancock, docked at the 28th Street Naval Station. The next two nights, he played two sold-out shows at the San Diego Arena, aka Glacier Garden. Among the backstage visitors on April 4 was aspiring singer Glen Troutman, later known as Glen Glenn.

“He was very nice to talk to, but he was very nervous,” recalls Glenn in an interview recently posted at scottymoore.net. “I don’t think he’d played to such a big crowd before. I remember him biting his bottom lip a lot, drinking Coke, and just buzzing with nervous energy.”

As seen in Glenn’s previously unpublished backstage photos, “The jacket he was wearing was drenched in sweat because he’d worked so hard onstage. We spent a fair while talking to him, because they couldn’t get him out of the building due to all the screaming fans outside. In the end, they had to get the San Diego Shore Patrol to escort him back to his hotel room.”

The Scotty Moore site unearths a backstage photo from the April 5 show, with Elvis having switched to a dark jacket as he autographs the arm of a giggling young girl. The photographer’s notation indicates the girl to have been 12-year-old Barbara Shepherd, then of 2335 Seabreeze Drive.

Ticket sales for the two 1956 concerts reportedly totaled $17,250, with 11,250 fans attending. According to the book Elvis Day by Day, Presley was paid around $15,000 for the two-night stand. The day after the second San Diego date — April 6 — Presley signed a seven-year movie deal with Paramount. 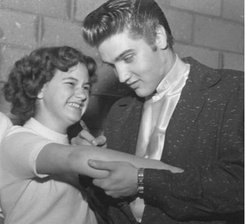