Ive heard from a reliable source close to Elvis that Clambake was his least favorite out of all his movies.

My guess would be, because it was so close to his real life, minus the famous part. He wouldn’t have been able to even trade off with somebody. He would have had to have made a more drastic change. 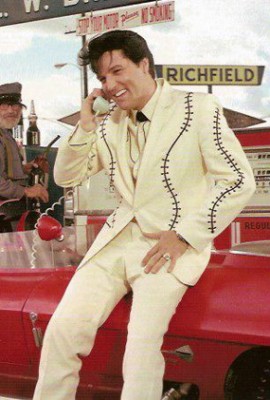 Towards the end of his movie career, Elvis Presley made Clambake (1967); it was number 25 of 31 total feature films he would make. Co-starring Shelley Fabares, Will Hutchins, and Bill Bixby, Clambake is a rock ‘n roll twist on Mark Twain’s The Prince and the Pauper. Presley is a rich oil heir who switches places with Hutchins, a humble water-ski instructor in Miami. Presley promptly falls for Fabares, a gold-digger with her sights originally set on snagging the wealthy playboy James J. Jamison III, played by Bill Bixby. The competing suitors must eventually settle their score in the most logical way possible: a speed boat race.

Fabares was by now a pro at playing the Elvis ingénue: she had similar roles in Girl Happy (1965) and Spinout (1966). She was also a teen idol since her days as Mary Stone on The Donna Reed Show (1958-64), even earning a top forty hit from her foray into pop music with “Johnny Angel.” Hutchins, who also appeared in Spinout, was known mainly for his work in television westerns, even earning his own short-lived series, Sugarfoot (1958-9). Bixby, who would appear with Elvis the next year in Speedway (1968), was better known to television audiences for his hit series: My Favorite Martian (1963-6). He would follow this up with two more popular TV franchises: The Courtship of Eddie’s Father (1969-72), and The Incredible Hulk (1978-82).

During the making of Clambake, Elvis was at a crossroads, both professionally and personally. Filmmaking had become a dayshift job for Elvis, and his films were seriously declining in popularity with his audiences, leading to an overall dimming of the King’s stardom. He wanted more serious material to challenge himself, but didn’t seem willing to pursue it: Priscilla recalled, “He blamed his fading popularity on his humdrum movies.” He “loathed their stock plots and short shooting schedules. He could have demanded better, more substantial scripts, but he didn’t.” His growing despondency also led to a significant weight gain just prior to the shoot for Clambake: he was now thirty pounds heavier and no longer the svelte Elvis from just a few years before. His use of prescription drugs had increased, blurring the line between medical help and addiction.

Priscilla herself was at the center of his current problems. Elvis had unofficially dated her since she was a sixteen-year-old and he was under enormous pressure from his Svengali-like manager Colonel Tom Parker to legitimize their relationship with marriage. Accordingly, they became engaged the previous December. Complicating the situation was Elvis’ financial situation: just a month before, he bought the Circle G Ranch in Mississippi, which would serve as a much-needed refuge for the stressed-out star, but at an expensive price.

According to press agent George Nichols: “He would have been happier if Priscilla had walked away. It was a forced marriage and he got the worse of it. Elvis was in no hurry to set a wedding date and planned to postpone it as long as possible. He was getting ready to make Clambake, in March 1967, when he tripped over the cord to a television in the bathroom. He fell head first, hit his head on the bathtub and was knocked out cold. Our representatives rushed to his house with the Colonel and found Elvis in bed with a minor concussion. We knew about his drug problem and assumed he was taking diet pills because he was overweight, and sleeping pills to get a good night’s sleep. The Colonel asked MGM to postpone Clambake, and assured us Elvis would slim down after a much-needed rest” (from The Leading Men of MGM by Jane Ellen Wayne).

Once shooting finally began, producers tried to lighten the mood; it was overwhelmingly evident that Elvis was not motivated to make the movie. In Careless Love, Presley biographer Peter Guralnick commented, “The atmosphere on the set was one of almost enforced gaiety. Once again there were practical jokes, cherry bombs, cream pie and water balloon fights, with even the director, Arthur Nadel, getting into the act. It was like a staged remembrance of things past ? but there was a wistful note, too, that did not escape some members of the cast.” But Elvis could not to be cheered up. Throughout filming, he listened to an album of spoken lyrics by French actor Charles Boyer of songs full of lost love and death, accompanied by sad, sweeping orchestrations.

Eventually Elvis’s dark mood subsided and his entourage was successful in restoring levity on the set. Bixby recalls observing the relationship between Presley and the Colonel in Careless Love: “They were like Frick and Frack when they’d get together – they really were. They were great put-on artists. The Colonel got me in on a mind-reading gag, and we worked it out with signals, Elvis and the Colonel and me. One of the guys would tell me a word that he was thinking of, and I’d never go near the Colonel, but he would get it [with these indicators]. It was a great way of entertaining ourselves.”

Co-star Hutchins, who had been surprised by Elvis’ initial melancholy, now saw the usual hijinks that accompanied the making of an Elvis Presley movie and suddenly understood the behavior. “Since Elvis got married so soon after filming, I realized that the movie was really his prolonged stag party.”

And Clambake was truly a farewell to Elvis’s bachelor days. The filming ended April 27, and he and Priscilla were married in Las Vegas four days later on May 1. The MGM promotions department didn’t miss a beat and included a 12×12 color autographed photo print of their wedding picture in specially-marked copies of the Clambake soundtrack album. Four years later, RCA would take a tip from them and include tiny squares of the white suit Elvis wears in the film in the boxed set, “Elvis: The Other Sides – Worldwide Gold Award Hits, Volume 2.”

For the record, Clambake had its fair share of cameos and bit roles, both human and animal. Three members of Elvis’s entourage – known as the “Memphis Mafia” – had uncredited parts: his right-hand man Joe Esposito along with Red West and Charlie Hodge. A young Corbin Bernsen appears in the scene where Elvis sings “Confidence,” fully dressed while water-skiing…it should be noted. Even Flipper, aka Susie the dolphin, makes an appearance in one scene. Teri Garr, at the beginning of her film career as a dancer/background chorus girl, appeared in no less than nine Elvis films by her own count, including Clambake. During filming, he confided in her, “I’ll do whatever they tell me. If we were making a record, I’d have something to say, but this is a movie, and I’ll just do as I’m told.”