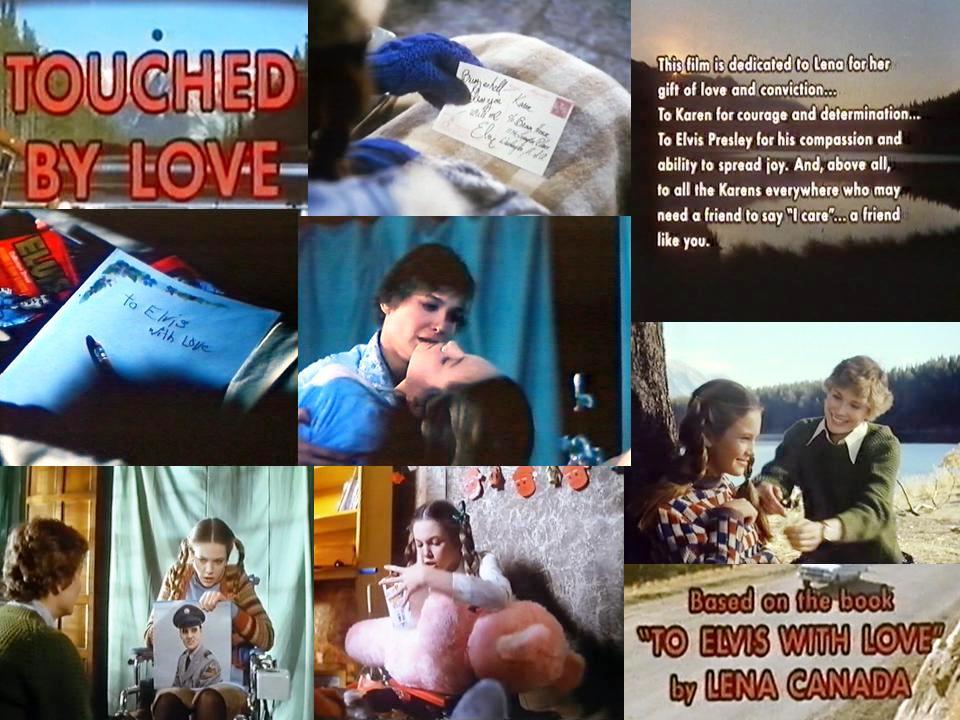 Anyone ever seen the film Touched by Love, its a true but tragic story that shows just what kind warm person Elvis truly was, though he never used any of the charitable things he did to bolster his fame, he kept them mostly private, how many so called stars of today can say that.

The Extraordinary True Story of Elvis’ Compassion for A Dieing Girl

Others, including screen versions of Lucy de Barbin’s fanciful tale, Are You Lonesome Tonight?’ and the definitive Elvis life story based on Peter Guralnick’s two part Elvis biography (‘Last Train to Memphis’ and ‘Careless Love’) have been mooted but are yet to eventuate.

Interestingly I can only think of three books about Elvis that have resulted in a film adaptation. Two of these are Elvis and Me (the mini-series based on Priscilla’s memoir) and the awful Elvis Meets Nixon (based on Bud Krogh’s book of the same name).

The third Elvis related movie based on a book is Touched By Love, a screen adaptation of Lena Canada’s memoir, To Elvis With Love. In many respects Touched By Love is the most important ‘Elvis related’ film ever made. Both the book and the movie detail the struggles brought on by cerebral palsy* and the great ability of Elvis to bring joy and happiness to people.

The movie, Touched By Love, was based on the book To Elvis, With Love. Lena Canada’s now very rare memoir tells the powerful, true story of Lena’s friendship and love for Karen, the young girl crippled and dying from the effects of cerebral palsy. It is also the story of the power that Elvis holds for many people. In Karen’s case the exchange of letters and gifts between Elvis and her bring incredible joy and happiness to the remainder of her greatly shortened life.

The story takes place on the outskirts of Stockholm in Sweden where Lena Canada works as a nurse in what is called the ‘Brown House’: ‘a charming, old-fashioned building, which, thanks to its size, gave an impression of majestic dignity.’ The house had been carefully converted into a boarding school-hospital and was home to twenty physically handicapped children.

It was while working in the Brown House that Lena formed a very special bond with the child only referred to by her Christian name, Karen. It was a bond that would bring great joy and sadness. The horrendous physical disability facing the children is vividly represented in the author’s narrative.

About Karen, Lena Canada wrote: ‘She was a small child, and the spastic contractions of her skinny body made her appear grotesque and horrifying.’ Despite its depressing parts, To Elvis, With Love is a story of hope and inspiration. From the first time Karen speaks to the incredible fun she and Lena have, this book will touch your heart.

The effect of Elvis on both Karen and Lena’s lives is strikingly told: ‘Elvis regarded us from the record cover. His eyes seemed to see what was happening between Karen and me, and his eyes understood; they seemed to overflow with pity and compassion.’

As with the film version, Elvis does not feature in the book until the story is well set. It also more adequately explains (than does the movie) how Elvis and Karen came to have a regular exchange of letters and gifts. Lena had come across the name of a Hollywood correspondent with close links to Elvis and contacted her with Karen’s sad story.

When the correspondence started, Elvis gave Karen a special address to write to, an address that by-passed his secretaries and came directly to him. While the Hollywood correspondent is not named it would not be unrealistic to surmise that it was either May Mann or Rona Barrett, both of whom had strong links with Elvis’ camp in the late 1950’s and throughout the 1960s.

As the story progresses and Karen receives more and more letters and gifts from Elvis the viewer really begins to appreciate the incredible power Elvis has and it is uplifting to see its positive effect on a young, crippled girl missing things that the majority of us take for granted. Following Karen’s death Lena Canada moved to California. It took her several years to overcome the pain and sense of loss she felt. While in California Lena would drive past Elvis’s home on Perugia Way. On one occasion Elvis pulled up along side her at a set of traffic lights and smiled. Before Lena could say anything the lights had changed and Elvis disappeared into the distance on his large Harley-Davidson.

Like the movie, To Elvis, With Love is difficult to locate today. Long out of print, second-hand bookstores are the best way of finding a copy. Online fans can obtain a copy through the second-hand bookstore network offered by Barnes & Noble at: www.bn.com. At the time of writing this article 13 copies were available through B&N (1 hardcover and 12 paperback).

Touched By Love – The Movie

Touched By Love, the film version of Lena Canada’s book, is relatively slowly plotted but very engaging. It is the synergistic integration of the slow plotting with its subject matter that drives it forward and gives it such a great impact. This film is like a snowball rolling down a hill. It starts out small and slow but by the time it comes to rest it has gathered amazing speed and grown greatly in size and impact.

There are many very emotionally charged and moving scenes in Touched By Love. The first major scene involving Elvis when Karen and Lena visit the local store and Karen’s demeanour is literally uplifted when she sees Elvis’s face on magazine covers and then several of his LP’s on the shelf brings a smile to your face.

Even more moving is a scene where Karen breaks free from the shackles of her physical and psychological despair and begins dancing in her wheelchair to Teddy Bear. Despite her love and admiration for Elvis there is an incredible inner tension for the crippled Karen: “He’s so alive. I love him…I could never move like that”.

A highlight of the film is the backing musical score. In particular, it is an instrumental version of Love Me Tender that heightens the story very effectively in several important scenes. It is a poignant element as we see Karen waiting day after day for the first letter from Elvis with the pouring rain outside symbolising the depressing reality of her physical and emotional plight. That scene makes you feel for Karen and it is easy to actually become angry at Elvis for not having replied.

And when that first letter finally arrives Karen is totally overcome, suffering a seizure in her panicked, emotional excitement and requiring oxygen. Later she says to Lena: “You worry too much. I knew it would come.”

Another scene highlights Elvis’s ability to touch people deep inside. Lena asks Karen: “What do you want for Christmas?” “Nothing”, replies Karen, “I have everything I want.”

There are a number of involving sub-plots in the narrative. The relationship of the highly intelligent Topper with his best friend, the lifeless Louie who never moves or speaks, but with whom Topper conducts conversations for the both of them, tugs at your heartstrings, especially when Topper’s parents come to take him home, thereby splitting up the previously inseparable pair.

Of the six Elvis songs featured in Touched By Love only two are sung by Elvis (Love Me Tender and Reddy Teddy). The others (Don’t Be Cruel; Teddy Bear; Hound Dog I Was The One and a second version of Love Me Tender) are very competently sung by a singer shown only in the credits as Alan.

The acting in Touched By Love is first rate. The two leads are very strong, particularly Diane Lane**, whose portrayal (and transformation) of Karen from a lifeless body in her wheelchair to an animated and vibrant, talkative young girl is exceptional. It is one of those rare experiences that make you question and appreciate your own life. You will recognise many of the supporting cast: Michael Learned played Mrs Walton in’ The Waltons’, Clu Culagher appeared in several television programs, notably ‘The Virginian, John Amos was a stand-out in the mini-series ‘Roots’ but is more well known as JJ’s father in the television comedy, ‘Good Times’ and Mary Wickes was a regular supporting actor in many 1950s and 1960s movies and television shows.

Touched By Love is an emotionally challenging journey. Its powerful themes of denial, obsession, sacrifice and struggle are cogently presented. As you experience Karen’s various struggles with her disability, her looks and her strong feelings for a handsome singer she feels unworthy of, you are drawn in and you too experience her pain in wanting and needing to be loved.

The penultimate scene is very touching. Karen’s death is not unexpected but it occurs suddenly, wrenching one’s emotions without any real warning.

Touched By Love is a difficult movie to locate. It is rarely shown on television and the video release is long deleted. A DVD release or video re-issue can only be hoped for. If you are fortunate enough to see it, be prepared. It is an emotional roller-coaster of a ride, so have your tissues handy.

Verdict: Touched By Love/To Elvis With Love is a generally little known or forgotten part of the Elvis story. It is an uplifting true story of love, hope and devotion and its important message is one of the most important parts of Elvis’s legacy, one that deserves to be remembered forever. The end statement of the film says it all: ‘To Elvis Presley for his compassion and ability to spread joy’.

* Cerebral palsy is a medical condition. It is not a disease or illness. As a result of injury to the brain a person has problems with his/her motor control, problems walking, talking, eating and speaking. Cerebral palsy can be a congenital condition or caused in the womb or during birth due to a lack of oxygen getting to the brain.

This entry was posted in Elvis - F.Y.I., Elvis Stories and tagged Elvis - Touched By Love. Bookmark the permalink.

One Response to Elvis – Touched By Love